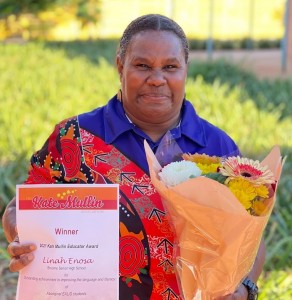 The winner of the Kate Mullin Educator Award for 2021 was Linah Enosa of Broome Senior High School.  Linah is an outstanding educator who is very much appreciated by her colleagues and community. She has worked at Broome SHS for many years as a long-term AIEO, Two Way teacher, leader and cultural consultant.

She has a passion for the cultivation of home languages and Two Way teaching which has been at the centre of cross-cultural partnerships and co-design of programs and curriculum.  She has mastered code-switching, is able to code-switch between cultures, and has worked tirelessly to support students to use their home language as a bridge to access Standard Australian English.

Linah helped plot and lead a renewed direction for the school in the area of whole school literacy promoting best practice in EALD pedagogy.

She has also worked with the teachers to embed Aboriginal Histories and Culture into the curriculum, with the result being highly engaged students as well as important learning opportunities for the staff. The depth and breadth of her traditional cultural knowledge is immense and has enriched the experience of all of the students.

Linah’s role at the school extends far beyond the classroom.  She also works tirelessly to build links with Aboriginal families and community to improve student engagement in their schooling. She is a core organiser of community events including community breakfasts, parent nights, NAIDOC celebrations and more. She is involved in the Aboriginal Education Committee and Aboriginal Advisory Committee.

The 2020 Kate Mullin Educator Award was shared between two Aboriginal Education Assistants from Christ The King Catholic School, Djarindjin Lombadina.  Lombadina is a medium-sized Aboriginal community on the north-western coast of WA on Cape Leveque, north of Broome in the Kimberley.  The two winners were: 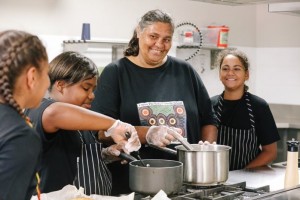 Philomena has embedded language and culture into the school curriculum and has promoted and recognised the importance of teaching of Bardi. She works with the Executive on attendance, pastoral care, Aboriginal education planning and two-way learning, and coordinates the programs of the Aboriginal Education Assistants.  In addition, she has: 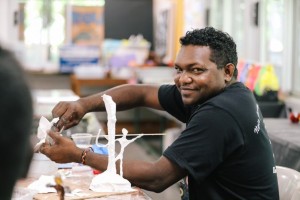 Vincent is the only male on staff and is an important role model for the students.  He is also a councilor on the Djarindjin Council.  He projects a positive self-image to the students and strongly encourages their attendance.  He talks to students in Bardi and SAE, thus demonstrating Two-Way in action.  He is on the school leadership team providing advice, mentorship and guidance for peers, families and students.  In addition, Vincent has: 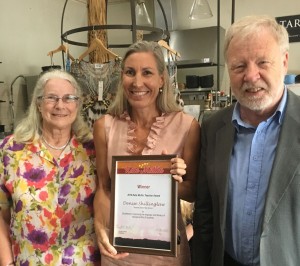 Denise Shillinglaw of Broome SHS (pictured right, in the centre) won the 2019 Kate Mullin Teacher Award.  Denise has a passion for improving language and literacy education for Aboriginal students, and the students at  Broome SHS  and its cluster schools have been the beneficiaries of this over the past ten years.

From her first year at Broome SHS as Head of the Learning Area of English, Denise implemented a strategic, whole-school approach to change attitudes in the school staff, provide knowledge to staff to adopt Two Way pedagogy and at the same time, support Aboriginal staff in the school to foster self-belief and confidence for success in the students.

In 2007, there were no Aboriginal or Torres Strait Islander graduates from the school, but following Denise’s intense work with teachers in the English department to develop programs designed to meet the literacy needs of Aboriginal students, the first Aboriginal ATAR students graduated at the end of 2011. By 2017, with strategic literacy development in explicit literacy instruction in Reading and Writing embedded across the whole school while still nurturing and developing Aboriginal English, Kriol and traditional Aboriginal languages, Denise had overseen Aboriginal graduation statistics increasing every year. In 2018 there were 24 Aboriginal students who graduated with a WACE Certificate. This was the highest number of any school in the state, and Broome SHS’s graduation rate is predicted to continue increasing over the coming years. 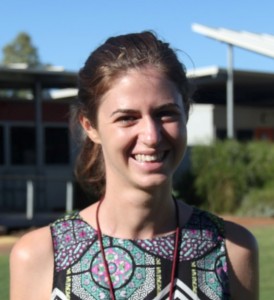 The winner of the 2018 Kate Mullin Teacher Award was Phoebe Stoneman (pictured right) of Wiluna Remote Community School.  Phoebe was a thoroughly deserved winner.  She was nominated for the Kate Mullin award by her Principal, Adriano Truscott, a nomination which was endorsed by Lena Long, a Wiluna Martu Elder, School Board member and a Shire Council member.  Phoebe has worked at Wiluna RCS since 2012 and is now the Learning Support Coordinator

As part of the Wiluna school community, Phoebe has contributed to Wiluna RCS’s recognition in 2018 by the Premier of WA which has seen the school receive the award for Aboriginal Education.

There was a very strong field for the 2017 Kate Mullin Teacher Award. Amongst a number of excellent candidates, the winner was Natasha 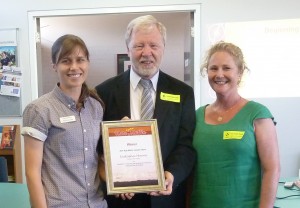 Moore of Southern River College in Gosnells. The presentation took place at the WATESOL AGM, and pictured right are Natasha (left) along with KMA Chairperson Ken Mullin and judging panel representative Sophia Sabatier.
To improve student outcomes in language and literacy, Natasha has used her EAL/D training, her career experience of four years in remote Aboriginal schools, and resources made available through the Department of Education (such as teaching Two-Way) to re-engage her year 7 students. She also uses Noongar dictionaries, explicitly teaches the difference between Aboriginal English and Standard Australian English, has established a spelling program, and uses levelled readers to track the students’ progress. Improvement of the functional literacy of the class, and students’ re-engagement, have led to significant improvements in the language and literacy of the students. 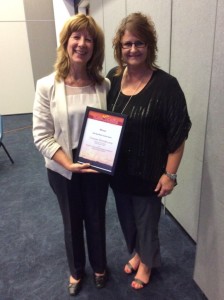 The judging panel had a difficult task this year deciding amongst a strong field of candidates.  In the end they were unable to separate 2 excellent entries, so the Award for 2016 is a tie.  The 2 winners are Jessica Albers of Yandeyarra Remote Community School and Louise Woodvine of the Pilbara Regional Services, Dept of Education.  In the judges’ view, both nominations scored strongly in all criteria.  The presentation took place at the WATESOL AGM.  Pictured right is Louise Woodvine (right) with Patsy Konigsberg, head of the judging panel.  Pictured below is Jessica Albers who “Skyped” into the ceremony from Yandeyarra, along with Patsy and Ken Mullin, Chairperson of the Kate Mullin Association. 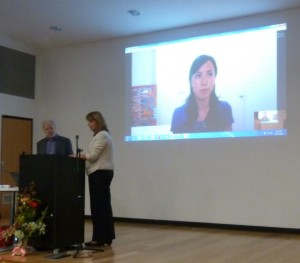 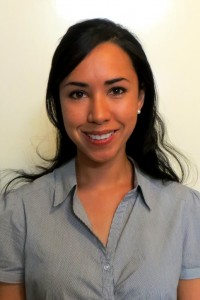 The 2015 Kate Mullin Teacher Award was awarded to Naenon Sommerville of the Wongutha CAPS School in Esperance. The award is for excellence in improving the language and literacy of Aboriginal students and is open to all teachers and educators in WA. Pictured are Naenon (left) receiving her Award from the head of the judging panel and KMA committee member, Sophia Sabatier. 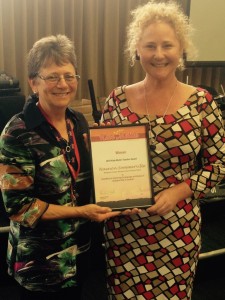 Naenon was nominated by her Deputy Principal, Brendan Franzone, a nomination which was endorsed with additional references by her colleague Herbert Howell, and by board member Harry Graham. The nomination addressed the four major criteria to a very high standard: Improved student outcomes in language and literacy; Links with Aboriginal families and community; Awareness, recognition and valuing of home language/dialect and culture; Development of rapport with students.

This award recognises and celebrates excellence in the language and literacy education of Aboriginal students. This year the judging panel had a difficult task deciding amongst a strong field of candidates. In the end they were unable to separate 2 excellent entries, so the Award for 2014 is a tie. 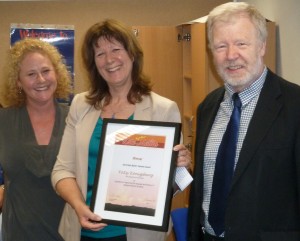 The joint winners are Emma Sookee from Nyikina Mangala Community School in the West Kimberley, and the Patsy Konigsberg / Glenys Collard team from the WA Department of Education.
Emma’s nomination scored strongly in all criteria, and was particularly strong in her ability to improve student outcomes in language and literacy. Patsy and Glenys’s nomination also scored strongly in all criteria, and had particularly strong referee support. Our congratulations to such worthy winners.

The winner of the 2013 Kate Mullin Teacher Award was Adriano Truscott (pictured) of Wiluna Remote Community School.  Adriano was nominated for the Award by his Principal, Arama Mataira and the School Council chairperson, Gail Alison. 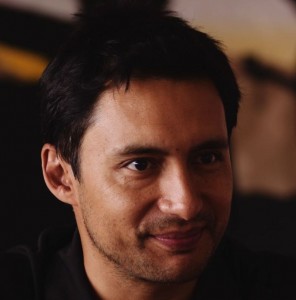 His nomination addressed the four major criteria to a very high standard, and the school has seen clear improvement in the students’ literacy in Standard Australian English since Adriano’s arrival.

The award ceremony was held as part of the WATESOL annual conference & AGM at the Institute for Professional Learning in October 2013.   Part of the ceremony were Ken Mullin, chairperson of the KMA, Michael and Julie Jacobs of the Lindsay Cozens Trust who kindly sponsored the award, and Sophia Sabatier of the KMA who headed the judging panel.